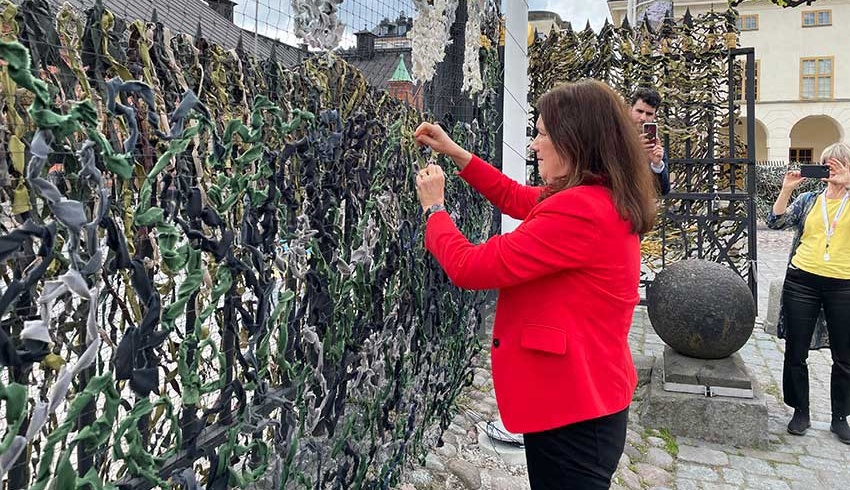 This page is devoted to a memorial gobelin Deti / Children, which was created by the Belarusian artists Edvard Tarletski and Ludmila Christeseva during their exhibition Hantverk som räddar liv (Life-saving crafts) in the Swedish Museum of Army in May 2022.

The exhibition featured camouflage nets handmade by Ukrainian refugees and Swedish families for the Ukrainian army during a series of textile workshops, organized by Ludmila Christeseva and Edvard Tarletski. The creative meetings Life-saving crafts were organized in different parts of Stockholm every Saturday since the Russian invasion of Ukraine on the 24th of February 2022. Recycled textiles from Swedish homes became the material for Ukrainian women and children to produce camouflage nets to be sent to Ukraine to save lives of their husbands, fathers, and sons in war.

DETI means Children in Russian and for many of us it means future. However, not for the Russian Army. We have woven the word DETI into one of the camouflage nets to remember more than one thousand people hiding from the bomb attack inside the Donetsk Regional Drama Theatre in Mariupol on the 16th of March, 2022. DETI was written on the ground-next to the theater with big letters as a caution which would be visible from the air. Still, Russian Armed Forces destroyed the theatre and killed over 600 people.

The gobelin “DETI /CHILDREN” is a call to the world community to do more for ending wars and armed conflicts around the world which leave millions of children facing poverty, disease, and hunger. This innocent experience of war, a life without parents and a home is a lonely world, full of fear and unfulfilled dreams.

Emerged in 2014 as a way for Ukrainian women to revolt against the Russian invasion, the traditional Ukrainian camouflage weaving was turned into a global art movement through the project Life-saving crafts. Bringing people from around the world together in the creative production of camouflage nets for Ukraine’s defenders, represents powerful artistic support for Ukraine towards freedom and peace. On 25th of May, 2022, the Minister for Foreign Affairs of Sweden, Ann Linde contributed to Life-saving crafts by weaving a band into a camouflage net DETI.

We have woven Deti… What else can we do for peace and freedom?!