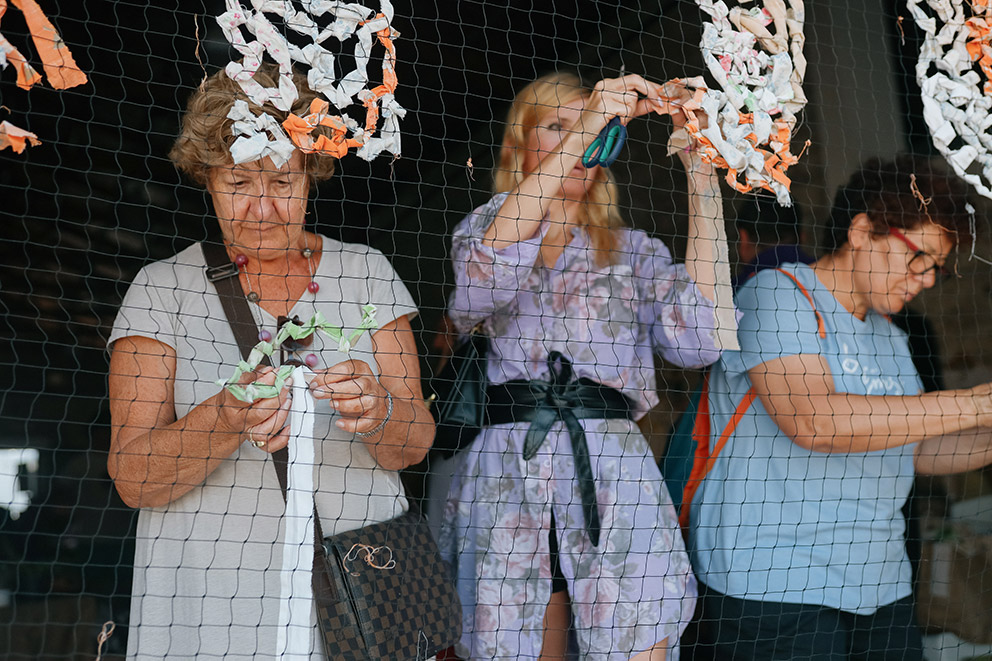 We are honored to invite you to the inauguration of the global textile movement “Crafts that Unite, Heal, and Last”. The exhibition will be showcased at Livrustkammaren during Stockholm Design Week, from  February, 7–12.

The current war in Ukraine has forced people to leave their HOMEs. The migration has informed a new trend in the design world and united people for hope and optimism. In spring 2022, Swedish and Ukrainian women joined a series of textile workshops and wove camouflage nets from recycled textiles to save lives. The former Swedish Minister of Foreign Affairs, Ann Linde, participated in our workshop through weaving a band for peace and freedom together with us.

“Craft that Unite, Heal, and Last” is a curatorial effort to promote female entrepreneurship in creative industries. The exhibition features a textile sculpture “Home”, the production of which began in Turkey with support from the Swedish Institute. The process of weaving has taken place both in Sweden and the United States, so far. The project’s goal is to unite women all over the world for sisterhood and solidarity. After the presentation at Livrustkammaren, the project will be showcased at Oslo Freedom Forum by an invitation from Human Rights Foundation.

The exhibition at Livrustkammaren inspires visitors further with a unique fashion collection rooted in traditions of Swedish Haute Couture and collectively produced by Ukrainian teens in a dialogue with their new Swedish friends.

The collection of paintings Restarts Ukraine! created by Ukrainian and Swedish children will be on display as well. Working together during spring 2022, the colors generated showed the way for the young people away from death and grief, and enabled them to meet new friends which contributed to a moment of warmth and fellowship.

The exhibition runs between 7 and 12 February and includes a series of events:
9 February, 18.00-20.00 – Weaver’s installation performance with Nefeli Oikonomou and screening of the documentary “The other side of the sea”, directed by Hsuan Yu Pan (USA/Taiwan).
11-12 February, 11.00-17.00 – Craft market. Discover the latest trends from artisan women from around the world. Weave a band for peace and freedom for a better future.
12 February, 12.00 Artist talk with Ludmila Christeseva and Louise Wallenberg (Stockholm University).