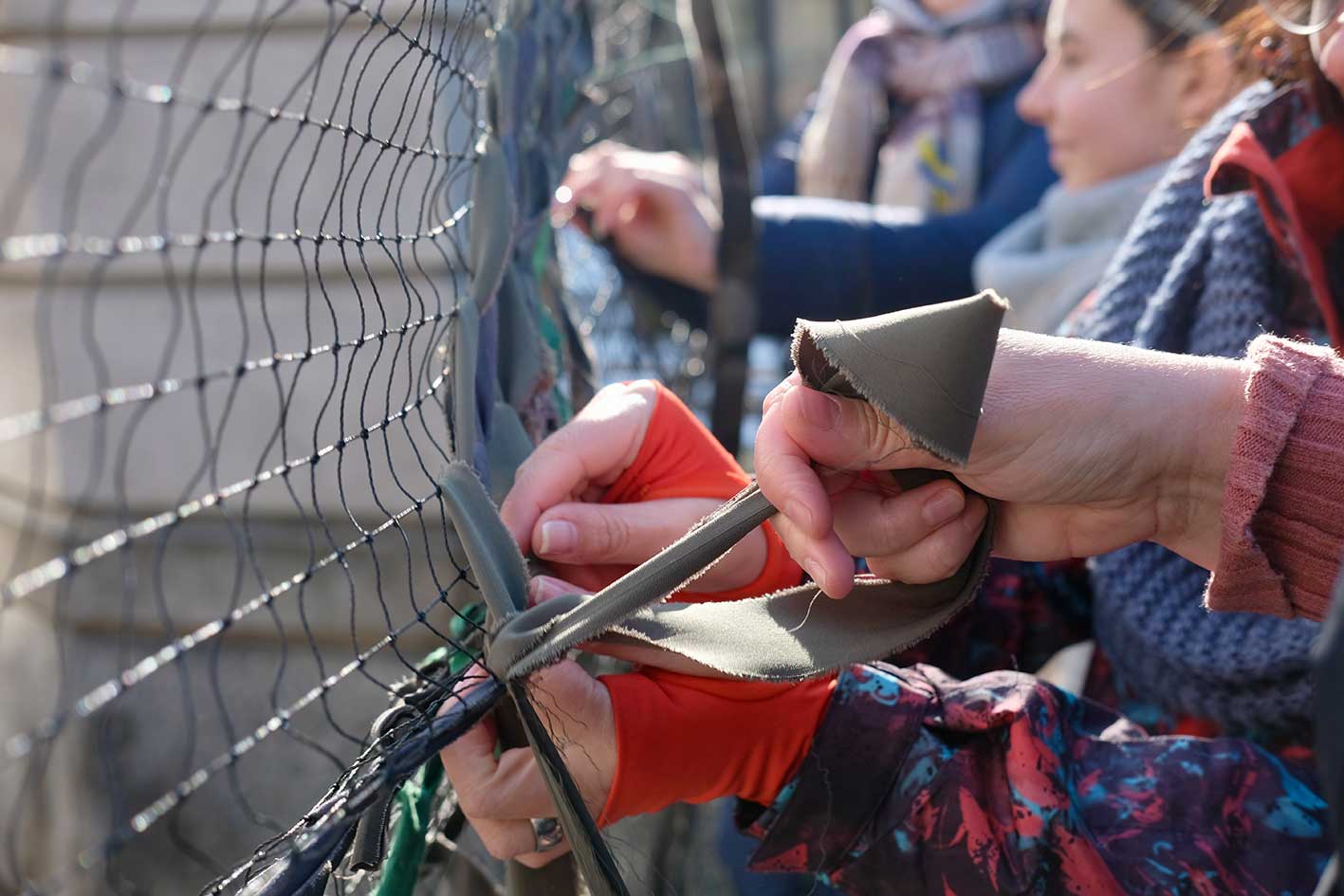 On February, 24, Russia invaded Ukraine bringing people around the world together in a powerful force supporting and helping the Ukrainian people. In March 2022, Ludmila Christeseva initiated a series of textile workshops for making camouflage nets for the Ukrainian Armed Forces – Hantverk som räddar liv / Crafts that save lives. Christeseva welcomed newly arrived Ukrainian mothers and children. The first workshop Hantverk som räddar liv / Crafts that save lives took place on March, 20 and ran every Saturday. We produced 10 camouflage nets by hand and sent them to Ukraine. Hantverk som räddar liv / Crafts that save lives united hundreds of people from different parts of the City of Stockholm in a powerful movement based on creativity and sustainability for peace and freedom in Ukraine and in the rest of the world.

During workshops, we have had the possibility to support many families from Ukraine. Our work focuses on integration through crafts and arts. The interaction between Swedish and Ukrainian families and children who fled death and horror in Ukraine, and found a new home in Sweden, is enabled through joint weaving, painting, and cooking workshops as well as sharing Swedish Fika. The approach facilitates the language learning and cultural exchange.

The Minister of Foreign Affairs Ann Linde wove a band into one of the camouflage nets together with the artist Ludmila Christeseva.

The camouflage pattern is omnipresent in our lives from hunting wildlife to fashion trends. During the war, camouflage nets are used to protect people and equipment from the enemy’s eye. The origin of camouflage can be traced back to antiquity and myths list different techniques of making it. The well-known legend of the Trojan Horse for instance also mentions camouflage. Camouflage nets we use today, are dated at over a hundred years ago during the First World War.

The war in Ukraine created a demand for camouflage nets and many Ukrainian women began to craft them by hand from new textiles and recycled clothes. Camouflage weaving has become a part of Ukrainian culture in recent years and it will certainly remain after the end of the war, as an independent form of textile craft narrating about hope, justice, and optimism. One of our young participants Masha Babii from Kiev has been braiding camouflage nets since 2016. Today she is 18 years old. Hantverk som räddar liv is an art project with the research question: What is Masha´s and her friends’ in Ukraine future? How can we change it?

Hantverk som räddar liv at Armémuseum in stockholm
SUPPORT US

The workshops are free of charge and for everyone. During the workshops, we share a Swedish Fika, discuss creative ideas, and support each other. Without knowing each other language, our friendship and mutual understanding got anchored in the language of crafts. It is a beautiful journey we are making together towards peace and justice.

The project is supported by

When cherry blossoms in one part of the world, colours may fade in another.